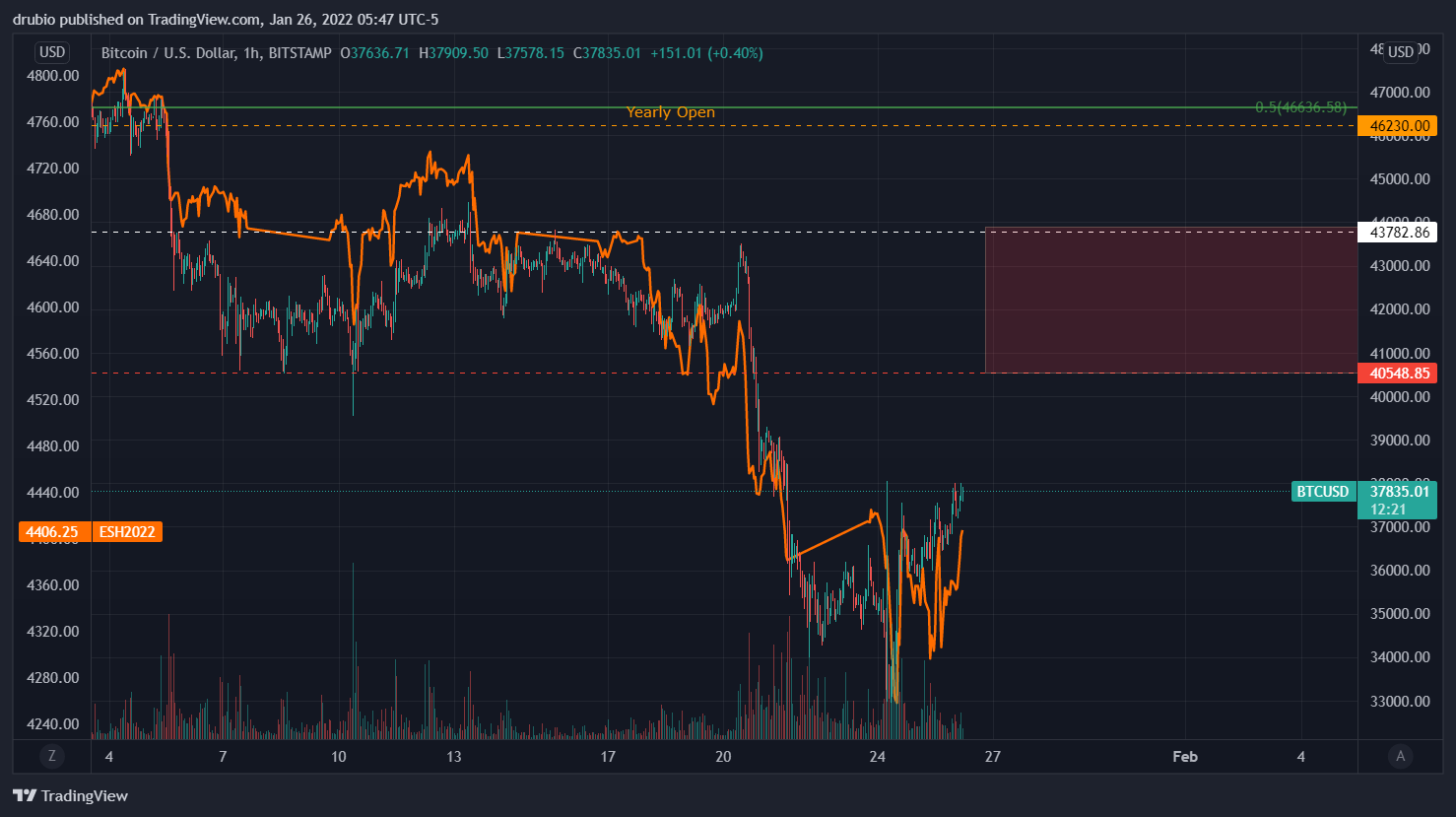 It is no secret to anyone that BTC and crypto as a whole have been deeply correlated to the traditional markets, especially the ones represented in the NYSE (With the highest correlation to S&P500/ES1! and NASDAQ/QQQ).

This week marks an important date where many fundamental factors can affect prices which isn’t necessarily priced in such as the following:

The market has already priced in expectations on these events to happen which serves to explain the faster decline in the past few weeks, nonetheless, the velocity at which the Federal Reserve can taper or decrease its balance sheet is unknown. Companies such as Wells Fargo and Goldman Sachs have expressed optimistic points of view due to the geopolitical uncertainty at which the USA is right now, expecting at most communication from dates for tapering after March (previously announced date for raising rates) given the impact markets have already had (as seen in the chart below). As far as technical analysis, if the 200MA isn’t reclaimed we would expect the price to fall under the white range presented, with the potential for lower prices if previous support doesn’t hold.

So as far as $BTC goes, this leaves us in the following predicament within the range we had Year to Date.

Yearly Open at 46,230 has yet to be reclaimed or retested and the weekly supply zone is marked in red. A local bottom has been formed around the liquidity cluster of the CME gap which can be seen in the following chart where green bars are already tested CME gaps while red bars are unreclaimed ones. CME (1) represents the vast majority of institutional instruments (all BTC Futures are based in CME Futures as an underlying asset) in BTC as well as Grayscale Bitcoin Trust (2). While FOMC meeting is not expected to present major bearish sentiment that isn’t priced in already (due to the current macro situation where accelerating would be unviable, it is more likely that covid mandates are removed as to facilitate the supply chain issues affecting inflation), the supply zone marked in the chart above would still represent a big resistance and downtrend is more likely to be resumed rather than not as all risk-on assets (both Crypto and Growth stocks) keep selling off. There’s a big liquidity cluster at the bottom of the range and stops are likely to be set at 28,000 which, if frontran, would end up being taken to our next liquidity cluster at the CME gap of 26,000. Market consensus lies around 30,000 as a place of support and stops are likely to be set at 28,000 (last year’s previous low).

If all previously mentioned unknowns are resolved in a positive manner and the Fed takes a dovish take on all markets, we’ll have to see the response at the weekly supply zone. Open Interest on the biggest futures exchange (bybit) seems to imply a loss of both capital and interest from retail (3), while GBTC discount and CME loss of momentum seems to represent a loss of interest from institutions in BTC.

In conclusion, the market in general is not as liquid and is therefore much more correlated to the performance of the SP500 right now. If the SP500 reclaims its daily 200MA and keeps moving to the upside, BTC will follow. In the meanwhile, capitulation has been taking place amongst the market.

The post Price Prediction for $BTC on the back of the FOMC appeared first on CryptoTicker.

Price Prediction for $BTC on the back of the FOMC