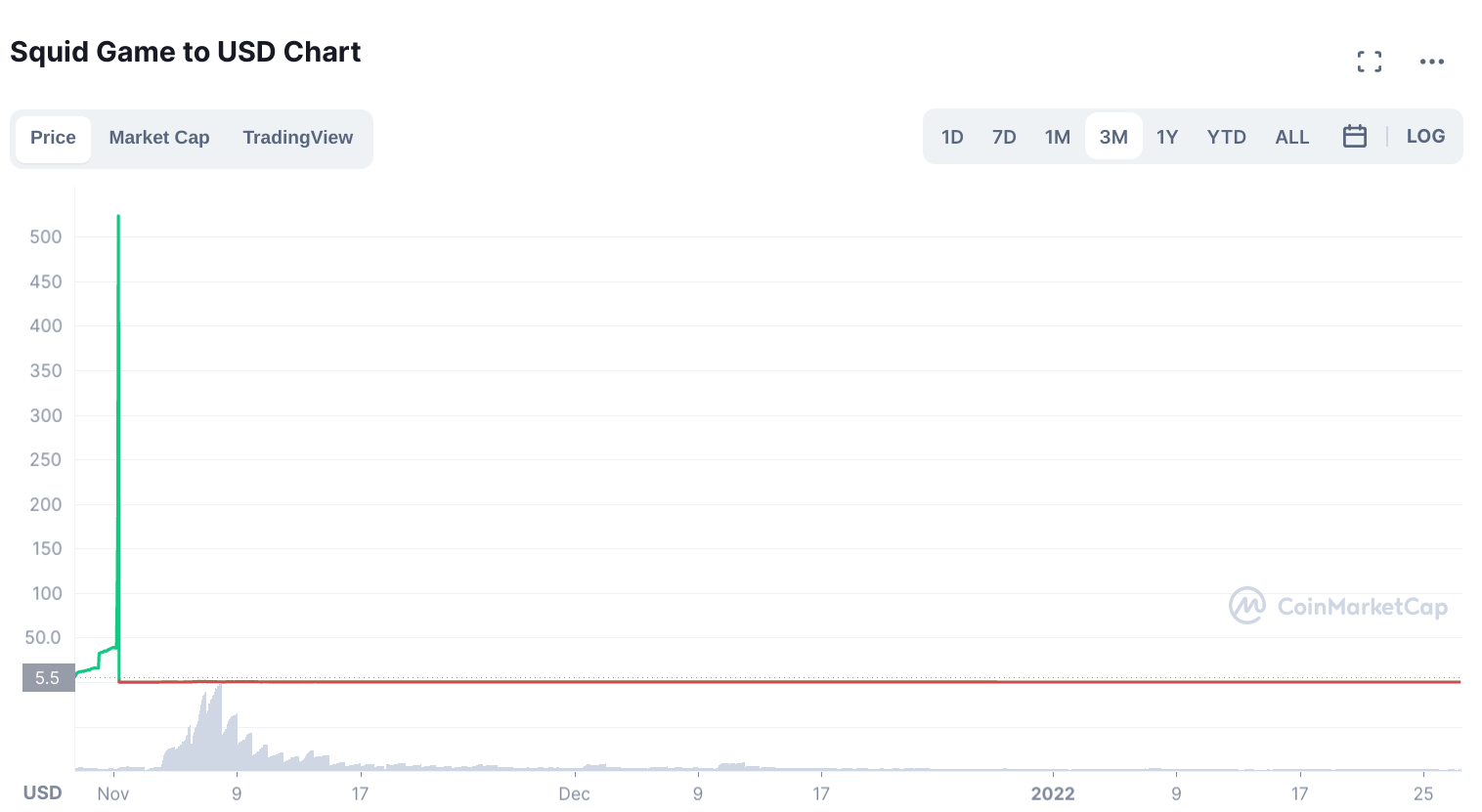 Several weeks ago, the squid token was released after clearly stating that it was not affiliated with the hit show—Squid game. When Squid Game came on Netflix, many users enjoyed how everything played out, helping the token grow within a short period. Many people did not know that the Squid token was a means to scam people of their money. While many people knew that the token’s name might help it generate enough interest to assure gains, they did not know that they had fallen into a rug pull, capable of taking the asset’s price to zero. In this article, we will be looking at the SQUID token and how to avoid crypto scams 2022.

How Did The Scam Play Out?

Since the digital asset space thrives when new products that drive interest are created, many people utilize the opportunity to buy thousands of Squid tokens to benefit from any value increase. In Squid game, a game organizer brought in players in debt to participate in play-to-earn games. However, the game was the winner takes all, inspiring the Squid token.

One of the major red flags for the Squid token was the unrealistic whitepaper. Teams create whitepapers to inform interested investors of their plans in the coming months or years. However, when a whitepaper sounds too good to be true, it is probably too good to be true. The paper assured that the more the people who buy the token, the larger the pool will be, a significant part of a Ponzi scheme.

However, some people found it suspicious that a token would promise attractive rewards. Before the digital asset system was regulated correctly, many tokens came with different whitepapers and promises that never saw the light of the day. Some scammers use the opportunity to take away millions of dollars, leaving investors with tokens without liquidity.

When assets turn to zero, it’s often game over for users because they end up losing everything they have put into the investment. Thankfully, regulations have curbed some excesses in the digital asset space, but some users are victims of scams. Those who bought the Squid token saw their assets rise. The asset saw an incredible increase in value before people noticed its problem.

When the price doubled and even tripled at intervals, many people who bought were ready to sell their holding to secure their profits. However, many realized that they could not sell, which led to an uproar on Twitter. While many felt they had been scammed, others kept on believing that it was a glitch. Interestingly, the Squid token continued to grow, attracting mainstream news outlets. However, they failed to clarify that the Squid game token had no affiliation with the Netflix series. Because they failed to do this, many other users bought the token to join in the gains.

At a point, the token rose to $600 per coin. This, of course, made investors overjoyed as they watched their money grow. However, before they could withdraw, the creators had removed $3.35 million, the total amount of money invested into the token. After this, the token dropped around a quarter, leaving holders penniless.

What Is A Rug Pull?

A rug pull occurs when a developer or token creator makes away with an investor’s money after getting them to invest in it. While rug pulls are every investor’s nightmare, you need to understand some signs of a rug pull. When you understand these signs, you can make a better purchase decision and not buy coins that seem suspicious or too good to be true.

One of the popular ways to pull a rug pull is to prevent investors from selling their holdings. This has to do with some manipulations, making it impossible for the exchange to buy the coin from the holder. And when the exchange does not buy, the token becomes useless to the investor. During this time, the developer sells all his holding, which is usually much, leading to a price crash.

Another way to pull off a rug pull is by removing liquidity. This means that the developer removes a large amount of money from the system. They do this by pumping the coin, buying a large amount, and dumping it after, leading to a price crash. Price crashes are not new to crypto investors. However, when a pump and dump occurs, the asset’s value can drop close to zero.

Crypto Scams – How To Avoid them?

While you may not always be correct in identifying scam tokens, you may reduce the chances of losing money. It’s also safe to mention that you should only invest an amount that will not hurt your savings or financial standing. Below are some red flags you need to keep track of when you want to buy a new asset:

When it’s too good to be true

When an asset is too good to be true, then it usually is. For instance, if the whitepaper makes some unrealistic promises, you should be suspicious in that instance. While it’s great to purchase a good asset, you need to buy one that can accomplish those promises and not just lie to get you to invest.

When it’s a hype or meme coin

We’re not saying that ALL meme coins are bad. Some of them have already established communities behind them. We’re talking about any new project that tries to benefit from an already established project outside of crypto, and some developer creates a meme coin about it overnight.

Because of the volatility of assets

Holders tend to gain or lose very fast. In any instance, it’s good to understand the coin you are buying. Stay away from hype or meme coins if you want a long-term investment. Hype coins usually get a lot of attention and drop very fast. When users purchase tokens, most people are not interested in holding, and they may sell them off to assure gains.

When it goes up very fast

Everyone invests in cryptocurrencies to record gains. While it’s natural to expect gains from your investment, you should suspect foul play if the coin goes up too fast. For instance, Shiba Inu rose, helping holders gain rewards, but fell not so long after the increase. Whenever a coin is too volatile, you should suspect some manipulations.

When you don’t know the team behind it

This is a sure sign to help you know if a coin is worth buying. Because these scammers understand that they want to make away with money, they tend to give less information as possible to prevent the authorities from tracing the transaction. And because of blockchain anonymity, tracing account holders have been difficult.

Why New Projects Without Value Are Very Risky

Investing in a new project may help you grow your money within a short period. However, since it’s a new project, you don’t know what to expect from it. This becomes riskier when the new token has no particular value or use.

Frequently, tokens have use cases that are associated with the project. When the token is not contributing to the growth of any project, you should be worried because new projects are unpredictable, particularly when they don’t have real-world value.

Risk is a vital part of investing, but you should take reasonable risks. Buying a new token without a use case or Importance may lead to money loss, especially when it turns out to be a scam.

Despite the controversies associated with Squid game tokens, many people purchase Squidanomics. This game combines the thrills associated with the Squid game and ensures users can make money. Like other play-to-earn games in the digital asset community, it embraces the essentials of earning while enjoying the gameplay.

Launched on the 18th of October, Squidanomics is a Binance smart chain-based token that embraces Squid Game and tokenizes items for rewards. Today, many firms have the means to reward users, whether in non-fungible or fungible tokens. It brings NFY concepts into a metaverse that prioritizes earning through gameplay.

What Is A Metaverse?

Metaverse is not new to the digital world. However, due to Facebook’s outlook, other firms are now interested in creating the same to ensure adoption. It plans to be one of the most rewarding tokens on Binance Smart Chain and exploit the interest in Squid Game. When Squid Game was released months ago, it topped the charts on Netflix, making it one of the most-watched shows in 2021. Because of the loyalty Squid game commands, it’s natural that Squidanomics may want to exploit popularity for the asset’s growth.

A metaverse is a virtual world that humans can only access through technology. For instance, many gamers use virtual reality gears to play virtual games, exploiting a new world. Facebook believes that creating a metaverse may help humans access technology in a better form. While this may be true, many creators create metaverse to ensure the adequate exploration of play to earn games.

While there have been many scam tokens, Squid token is one that many people will not forget any time soon. It made it necessary to duly research on products you want to buy, in a bid to prevent loss of funds. Naturally, cryptocurrency is a risky investment, which can either make or mere an investor. Still, you can gain from your assets when you make the right investment choices.

The post How to Avoid Crypto Scams? Don’t be a Victim of Squid Tokens in 2022 appeared first on CryptoTicker.

How to Avoid Crypto Scams? Don’t be a Victim of Squid Tokens in 2022

Previous PostPolygon MATIC Explained – Buy MATIC in 2022?Next PostNorton Crypto: is it a Good Mining Alternative in 2022?