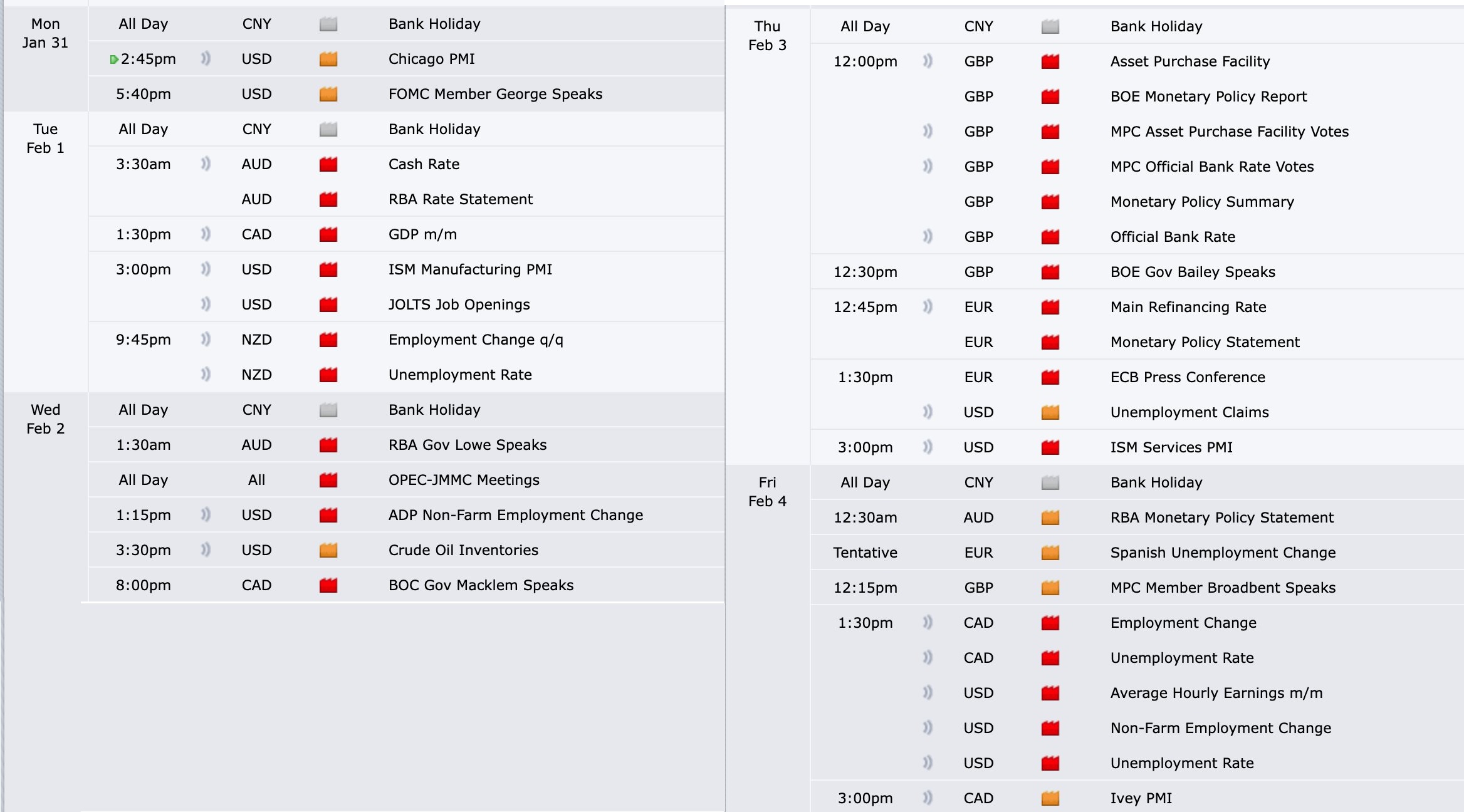 There’s a lot of pressure on all markets due to the environment affecting macro economies and markets. Today we will review the economic calendar of the week in front of us. The recent hawkish takes (Hawkish environments are when policymakers and advisors who favor higher interest rates to keep inflation in check) strengthen the dollar, and historically macro trend changes in the dollar hurt risk-on assets such as cryptocurrencies to the downside.

MONDAY – This marks the start of the Chinese New Year and will be a holiday all week, you can expect liquidity to be thin during the Asian session of the Hong Kong Stock Exchange (01:30-08:00 UTC). Expect this to cause drastic moves in price action as market makers are more aggressive through liquidity hunting moves. Historically, Chinese New Year has represented a date where the Asian Session offloads their assets and sells in mass. Additionally, FOMC member Esther George was quoted recently on Reuters with a hawkish take on the market saying the following “The U.S. Federal Reserve should begin to reduce its holdings of U.S. Treasury bonds and mortgage-backed securities accumulated during the pandemic in the not too distant future” his speech could spur risk-OFF environment and USD strength on Monday.

TUESDAY – US manufacturing data (ISM Manufacturing PMI) could continue the USD strength on Tuesday. The RBA (Reserve Bank of Australia) is set to turn more hawkish in the face of a strengthening economy – improving the AUD. Other events include Canadian GDP (expecting underperformance) and New Zealand employment data which has little effect on crypto but mark a macro trend towards a risk-off environment worldwide.

WEDNESDAY – Early employment data out of the US could hint what Friday’s data will show, strength in US data moving forward will be bearish to risk-on assets as it reinforces the need for monetary policy normalization in the US. Other events include news affecting Oil prices which further affect the strength of the dollar.

THURSDAY – Markets are already pricing in a 25 bp (0.25%) hike from the Bank of England at this week’s meeting, expect the pound to be supported into that event. This will mark the first time since 2004 that the central bank has hiked rates in successive meetings. This, again, marks a threat to risk-on assets in the short term.

FRIDAY – This is the biggest day of the week as far as potential effects on $BTC/Bitcoin and Cryptocurrencies. US employment data is key to either accelerate tightening from the FOMC or to slow down the process. As cryptocurrency enthusiasts, we would want to see underwhelming data print here as it would help risk-on assets with more help from policymakers. Although it sounds contradictory, risk assets react to this push from policymakers to help get the underlying parts of the economy going. Expect $BTC to massively react to this data print on Friday.

In conclusion, it seems like USD will be strengthened alongside the GDP, AUD and NZD on the back of Central Banks’ hawkishness, the Fed has led the way. Expect choppy price action with China on holiday and a big event on Friday.

You can see previous analysis on the macro price action fo $BTC in this article.

The post Reviewing the Economic Calendar of the Week (Jan 31 – Feb 4 ) and its effect on $BTC appeared first on CryptoTicker.