DeFi Kingdoms has been one of the hottest GameFi projects over the past few months. With its upcoming plans for a cross-chain launch on the Avalanche blockchain, investors are getting excited over some recently leaked plans that are sure to bring even more utility to the blockchain game’s native JEWEL token.

JEWEL As A Gas Token?

people not reading will make me so rich man lmao

For several months now, DeFi Kingdoms fanatics have speculated over JEWEL becoming the native gas token on the blockchain game. Being a game based on Harmony (ONE), transactions are currently settled using the ONE token, meaning the player still needs to rely on the Harmony blockchain to play DeFi Kingdoms. However, it appears that this reality is finally set to change after a leak from the DeFi Kingdoms discord announcement channel:

DeFi Kingdoms fans have long awaited the game’s upcoming Crystalvale launch on the Avalanche blockchain, which is set to take place sometime in Q1 of this year (about one month remaining). Now that the GameFi project will be coming to the Avalanche subnet, fans agree that it would make better sense to have transactions settled with JEWEL itself as the gas token, rather than ONE or AVAX, or whatever layer-1 (L1) token that DeFi Kingdoms finds itself on in the future.

The move would be a massive step in the right direction for JEWEL. The token already crowns itself for its utility — it’s used for summoning heroes, going on quests, farming in the gardens, buying land/heroes, etc. The demand is already sky-high for JEWEL, but making it the de facto settlement token across all blockchains will be a game-changer for the project.

As you can see, since the game’s launch on Harmony, user metrics across the board went parabolic as new players joined the ecosystem. The levels have since stabled out as the game still remains on a single blockchain, but how will these metrics grow once DeFi Kingodms lands on Avalanche or any other blockchain that the team may have in store?

RECOMMENDED: HOW TO GET STARTED WITH DEFI KINGDOMS

While the news may be bullish for DeFi Kingdoms, the price charts don’t always have to reflect that. The JEWEL chart is undoubtedly not looking too strong, but the fundamentals have not changed — the most recent news indicates that they’ve only been growing stronger. 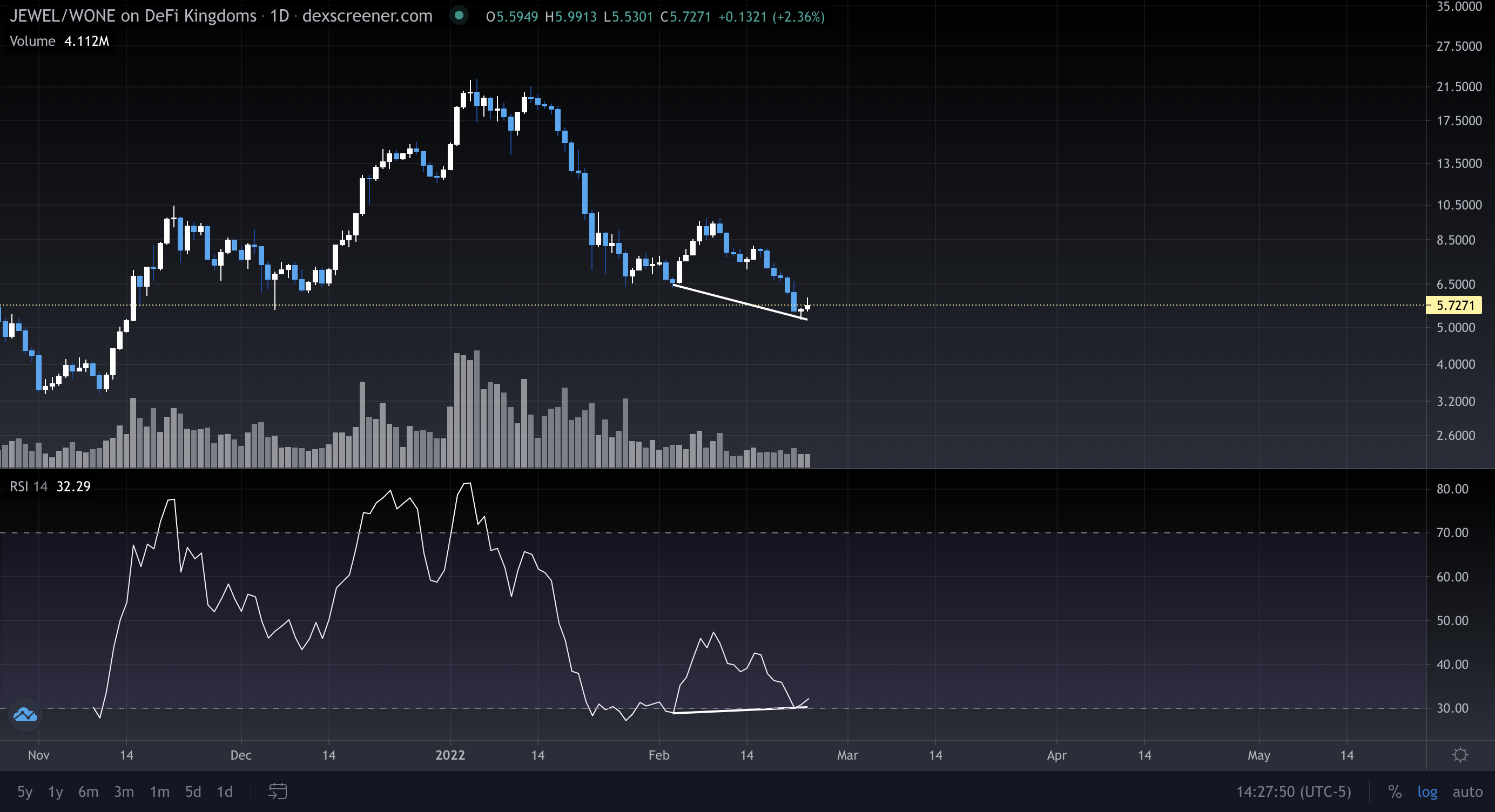 While there’s certainly an argument to be made for a massive head and shoulders pattern forming on the daily chart, the silver lining here is the bullish divergence playing out on the right shoulder. A bullish divergence forms when the price reaches a lower low, while the relative strength index (RSI) reached a higher low, indicating that the lower price levels are getting bid more aggressively.

Only time will tell what the market thinks about DeFi Kingdoms, but with so much in store left on the project’s roadmap, it may just be too early to count out the long-term growth potential for DeFi Kingdoms.

Previous PostBelieve It Or Not, Brian Armstrong Used To Hate AltcoinsNext PostThis Photographer Is Taking NFTs To New Heights… Literally