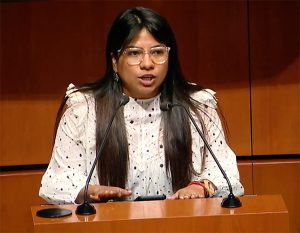 Mexico is taking a page out of El Salvador’s book with forthcoming law to make Bitcoin legal tender.

A prominent Mexican Senator, Indira Kempis, is drafting legislation that would make Bitcoin legal tender in the country of 129 million. In a recent interview with Diario El Salvador, the Senator made it clear that Mexico wants to follow in the footsteps of their neighbor to the South.

In the interview, Kempis detailed her recent trip to El Salvador, where she became “orange-pilled”. While speaking about her trip, she noted: “El Salvador is undoubtedly becoming the most important hub or laboratory in the world about the future with bitcoin.”  She tweeted out a photo taken by her in El Salvador of a local vendor accepting bitcoin with the caption: “financial inclusion.”

She went on to say in the interview, “this type of technology [bitcoin] is allowing us to generate an alternative, a way, a solution so that millions of people can be included in the financial system.” Kempis mentioned how El Salvador’s success with the law inspired the decision for her to draft the legislation to make bitcoin legal tender.

It was reported this week that tourism in El Salvador has risen substantially since the bitcoin law went into effect. Since September, when it became official, tourism numbers showed a spike of more than 30%. We have seen in the US that when Senators like Texas’s Ted Cruz have embraced bitcoin, they have garnered much wider support.

Why does Elizabeth Warren hate Bitcoin?

For the same reason that Xi and China hates Bitcoin: Neither one of them can control it. #Verdict https://t.co/2hO1B8SF2B pic.twitter.com/9otP8WFPnW

Mexico, much like El Salvador, could greatly benefit from adopting bitcoin. Their national currency, the Peso, is expected to continue depreciating against the dollar if the historical trend continues. However, both currencies are becoming inflated, which is why bitcoin is needed in the first place.

Kempis realizes that broad legalization is materially required for adoption, stating:  “We need Bitcoin to be legal tender in Mexico because, if it is not so if we do not make that decision as El Salvador did, it is very difficult to take action.” She is putting forth the bill to the Mexican Congress this year.

Not a newcomer, Kempis has been into crypto since 2018. According to an article from Cointelegraph, she has been in the crypto industry, too, since then. Now, she wants to bring it to her fellow citizens. “Now that I am participating in politics, I seek to promote it.” She even dons the laser eyes on her Twitter.

She is not the only prominent Mexican to support bitcoin. Ricardo Salinas Pliego, a Mexican billionaire businessman, has been an ardent supporter of bitcoin, citing its vast liquidity worldwide as critically important. He recently tweeted about “not feeding the whales.”

You have to buy #bitcoin (keep buying when the price is low), then just hold your #btc, forget about selling… trust me you’re going to thank me later https://t.co/wpqpfc8N15

More and more politicians are centering their entire platform around bitcoin as a tool for financial inclusion and economic stability. As the popular and albeit hopeful saying in the bitcoin community goes: “fix the money, fix the world.”