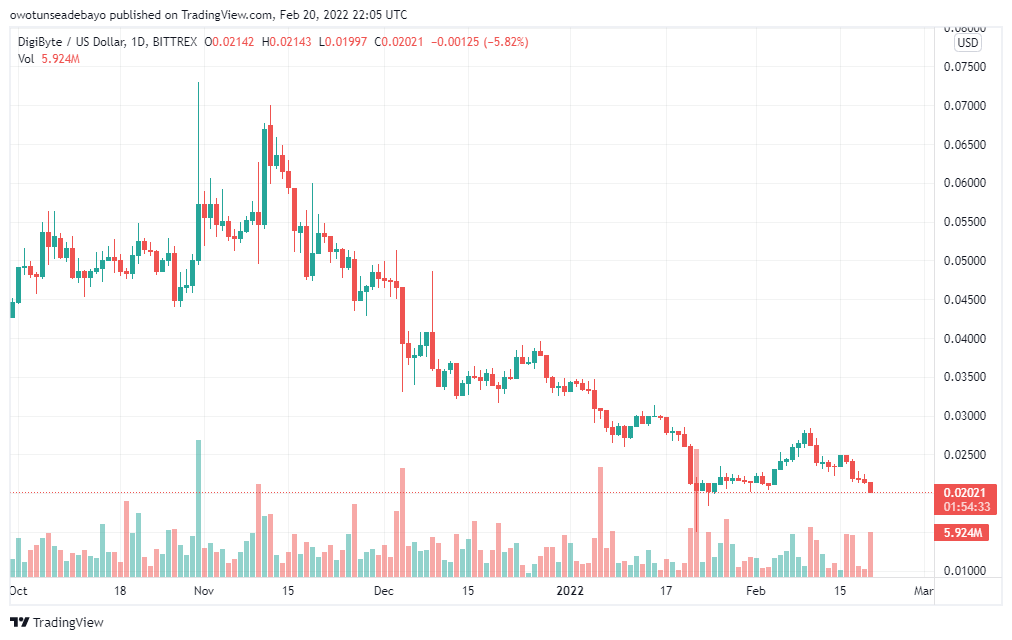 Blockchain technology has witnessed massive upgrades since the creation of Bitcoin in 2009. Over the years, developers have built a more sophisticated and secure blockchain technology. With this, users have a degree of comfort when carrying out their official business in the market. One such blockchain that aims to provide users with massive scalability and security is DigiByte. DigiByte doubles as a blockchain network and digital assets that traders can invest in. In this article, we will be looking keenly into DigiByte, intending to determine how much profits an investment in the token can bring in 2022.

DigiByte is a crypto project that doubles as a digital asset and a blockchain network. The project uses a three-dimensional layer to enable traders to carry out their activities as a network. The first layer enables smart contracts, dApps, and customized digital assets. Meanwhile, the second layer allows the native token of the blockchain, DigiByte facilitate transactions. The last layer is the most important, and it houses the nodes and other important features such as client software. Jared Tate created and launched DigiByte in 2014.

How Does DigiByte Work?

DigiByte’s launch came in 2014 after so many years of work on the project by the founders. The founder aimed to create an environment where traders could carry out fast and secure transactions. Also, the project aimed to fill up the excesses of projects like Bitcoin in terms of decentralization. DigiByte is run on an open-source, which means that developers can view its code and contribute when they want. Like Bitcoin, it uses a Proof of Work concept, which means that new tokens are created through mining. Also, the blockchain allows users to use different mining methods to generate new tokens. One distinct power that the blockchain has is that it changes the amount of power needed to mine new tokens anytime a block is added to the network.

Like most blockchains, DigiByte aims to tackle some serious problems plaguing blockchains in the crypto sector. To actualize this, the special features of DigiByte are speed, security, and scalability, among other features. Below are some of the distinct features and how DigiByte makes it possible.

DigiByte holds the record for the fastest block timings in all of the UTXO blockchains to date. With the time taken to carry out a transaction capped at 15 seconds, the blockchain has surmounted various issues related to this. One of the important triggers for this was a soft fork consensus which saw DigiByte adopt the SegWit protocol.

Although DigiByte has a founder, the platform acts without a CEO or someone at the top of its services. Buttressing this point, the project has never hosted an ICO or sold any portion of its yet mined tokens to investors. The project has based itself on a community project based on people volunteering.

Digi-ID is an application that allows users to sign into various applications making use of the security of the DigiByte blockchain. This is done by using a unique signature that mirrors the way transactions are signed using private keys. The app uses a QR code to enable users to sign in their details into different apps. The app generates different signatures for different logins at a particular time. Another thing that makes it distinct is its anonymity. This means that users do not require any personal details before using the app.

Digiassets is a decentralized platform on the DigiByte blockchain, which allows the issuing of digital assets. Anyone with zero or little knowledge can effectively carry out this activity through the platform. Also, users can use the mobile or desktop application to carry out the issuing process. The decentralized nature of the blockchain makes it impossible for users to manipulate the system. Companies use it to issue assets such as stocks and shares. Every issued asset is unique, which means that replication is not possible.

V-ID is a company located in the Netherlands focused on curbing frauds on the digital level. This is achieved by notarizing blockchain. To achieve the validation process, the file’s fingerprint is extracted and then uploaded on the blockchain. If someone tries to manipulate the fingerprint by changing a pixel, the V-ID app will raise the alarm. Besides digital documents, V-ID also helps curb manipulation and fraud on physical files.

Where can I buy DigiByte?

The first thought about acquiring DigiByte will be to mine the token like most proof of work tokens. However, this process is very tedious and time-consuming. In order to make it a viable source of income, one would need to purchase heavy and expensive hardware. This means that it will be advisable for one to purchase from a crypto exchange. To make this will depend on the platform, the amount, and how you intend to pay for it. However, buying DigiByte on centralized exchanges might be easy, you will be required to carry out some activities. These activities include fulfilling KYC requirements. Some of the few exchanges where you can purchase DigiByte include KuCoin, Binance, and FTX.

According to several sources, DigiByte is predicted to touch close to $0.029 on average, and a sudden push will see the digital asset touch close to $0.33. 2023 is expected to be another year that the token stake its claim and would be gunning for $0.44 on average. If it experiences a sudden push, it could trade around $0.50. In 2024, DigiByte has been predicted to reach around $0.62 on average, while a push would propel it to $0.75.

DigiByte would have been opened to more users and developers, pushing the price to reach a high of $0.096. However, if it experiences a sudden rise, it could go as high as staking a claim for $0.11. 2026 would also signal another push for the token, which could increase its average price to $0.14, with a push propelling it to $0.16.

There is no quick-fire way to know if one token would succeed or fail in the market. In the long run, tokens like DigiByte are not so popular and are held by only a minority of the market. However, it doesn’t take away the great use cases and features that the token possesses. DGB provides a safe, fast and easy way of carrying out transactions. This is something most investors and traders would kill for. This should not take away the need to research the token before a potential purchase. The market is fragile, and things move swiftly; it is advisable to diversify one’s portfolio.

The post Will An Investment In DigiByte crypto Be Worth It In 2022? appeared first on CryptoTicker.

Will An Investment In DigiByte crypto Be Worth It In 2022?

Previous PostCrypto Comeback! Bitcoin up by more than 10%, Buy Bitcoin NOW?Next PostOMG Coin – Will OmiseGo explode in the next few weeks? $OMG