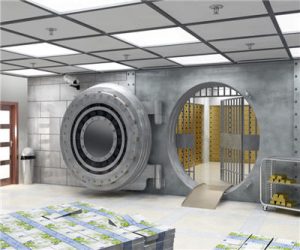 Not your Swiss bank, not your bread.

Switzerland and Swiss banks are notorious for privately safeguarding trillions of dollars worth of assets to keep away the prying eyes of financial authorities. Those with Swiss bank accounts are often uber-rich figures and entities looking for a safe haven to store their wealth.

According to recent statistics, Swiss banks hold over $6.5 trillion for their clients, roughly 25% of all global cross-border assets. Over time, as Swiss accounts ballooned in size, the Swiss government made it clear they are “neutral” and would not intervene to seize clients’ assets.

These Swiss banks are a favorite of Russian Oligarchs and their assets. In 2020, “Swiss banks held just under 10.5 billion francs from Russian sources.” All that changes today. Switzerland is now forgoing its longstanding policy of taking a “hands-off” approach to its clients’ wealth.

After a meeting with the Swiss Federal Council, it was announced the country “would immediately freeze the assets of Russia’s president, Vladimir V. Putin, Prime Minister Mikhail V. Mishustin and Foreign Minister Sergey V. Lavrov, as well as all 367 individuals sanctioned last week by the European Union.”

Putin's money (besides many luxury properties) is very widespread, but the bulk is with Swiss Private Banks in Geneva. Switzerland is the most popular offshore financial center for rich Russians by far. And about 80% of Russia's commodities are traded in Switzerland.

Citing “the unprecedented military attack by Russia on a sovereign European state”, Switzerland took this measure, which is the first of its kind. As the above tweet indicates, this will be a crippling blow to Russia. It is unclear if Putin will ever be able to retrieve these frozen assets.

Many have been speculating across the media spectrum that Putin and Russia are planning on using crypto to evade the sanctions and measures such as this. Of course, this has been spun as FUD, by usual suspects like Elizabeth Warren. She doesn’t want Putin or Americans to have access to privacy through crypto in all reality.

Crypto Can Be a Swiss Bank in Your Pocket

Swiss banks are no longer offering their #1 value proposition; privacy and secrecy.

While it may be for good reason, this is a major blow to those who have trusted Swiss banks as a custodian. Not your bank, not your bread. For better or worse, you can expect billions to flow in crypto as a result of this, as the risk of holding your own keys becomes less than getting your funds seized.

In fact, with some crypto, you can actually have a private bank account in your pocket. In 2018, Grayscale wrote their investment thesis about Zcash, the privacy coin, where they actually penned an entire section (beginning page 12) outlining how Zcash is a “Swiss Bank Account in Your Pocket.”

4/ It’s potential is acknowledged by famous whistleblower and #privacy advocate Edward Snowden, who called Zcash “the most interesting alternative” to Bitcoin.

According to Grayscale, it is noted that #Zcash has the potential to become a “Swiss bank account in your pocket”.

The report states: “ZEC (Zcash) may be the first globally
accessible, offshore investment opportunity, available to anyone, anywhere.” As many are beginning to realize, privacy is priceless and is not easy to obtain.

If this wasn’t so, then the world’s richest, including even the cloistered, paranoid Mr. Putin, wouldn’t have decided to stash billions into Swiss accounts. As technology has evolved, and the world has become “closer”, Swiss Banks have been increasingly under attack.

America’s war against the Swiss banks “started as early as the ‘70s when the government attempted to choke funding of drug cartels.” In October 2018, Swiss banks began “sharing information of people holding accounts in their banks with their respective countries.”

Meaning the American government, as an example, are able to see further into their citizen’s matters and papers in Switzerland. While in this case with Russia, we can argue that this is the correct course of action, it displays that financial privacy and sovereignty are increasingly hard to come by, even for the most powerful.

As Satoshi Nakamoto said when referencing the flaws of banks and the banking system:

“We have to trust them [banks] with our privacy, trust them not to let identity thieves drain our accounts.”