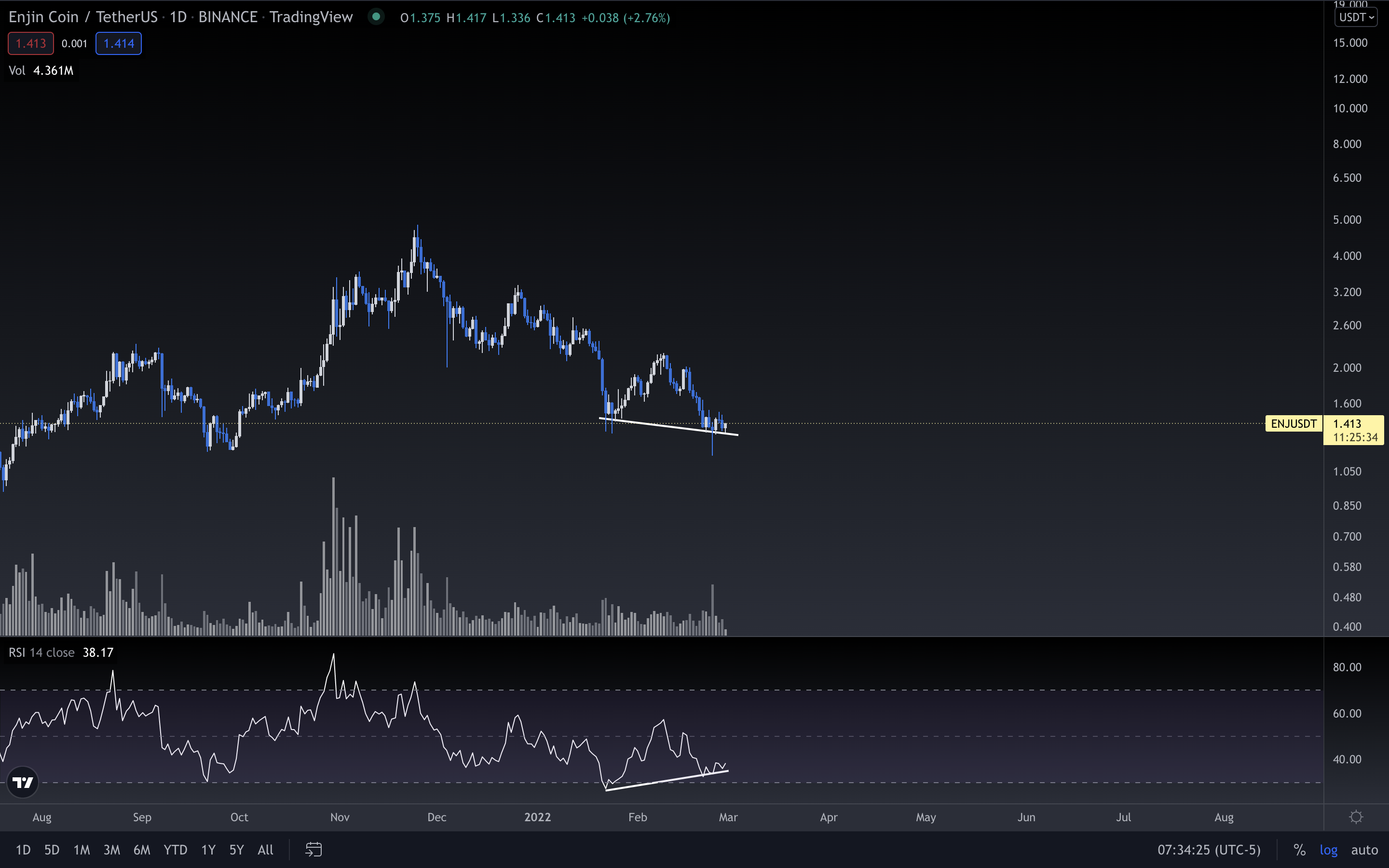 This week, we’re looking at three crypto gaming altcoins that are trading at promising accumulation levels.

First up on this week’s list is the Ethereum-based NFT development platform Enjin (ENJ). Enjin is one of the ‘blue-chip’ projects in the gaming and NFT space. Being Ethereum-based, you can expect ENJ to get a lot more usage in the coming months as NFTs heat back up in eyes of retail and game developers — ENJ is at the center of it all.

As you can see from the daily chart, ENJ is currently forming a bullish divergence, in which the price is setting a lower low while the relative strength index (RSI) is setting a higher low. This price action tells us that despite the price being lower, buyers are stepping in more aggressively than before to scoop up the dip, which could mean that they see promise at the current price tag.

There’s no guarantee that this structure holds, however; with macro uncertainty still looming over the crypto markets, any sort of negative development could hammer the Bitcoin price lower, sending ENJ swiftly down with it.

Ultra is a unique play in the crypto and blockchain gaming space as, rather than focusing directly on actual gaming or NFT development, Ultra is trying to become the “Steam of crypto.” If you’re at all familiar with the gaming community, then you’re probably very aware of what Steam is — the largest online gaming distribution platform, with more than 24 million registered users.

From the onset of the NFT hype train, Steam has surprisingly been resistant to jump aboard — they don’t want developers publishing blockchain games on its platform. Gamers not liking NFTs…shocker, huh?

1/ Valve banned blockchain games from Steam yesterday. It’s not surprising. Web2 centralized platforms get a cut of all value generated from its ecosystem. Blockchain circumvents that and decentralizes value back to builders and usershttps://t.co/vkE2RtZ8OI

Regardless of Steam’s opinion, UOS is positioned to be a prime investment to hedge against Steam’s short-sightedness. If NFTs and crypto gaming are to become mainstream, then UOS is here to capture a chunk of the Steam fanbase leaving the platform to play decentralized blockchain games rather than centralized Web2 titles. 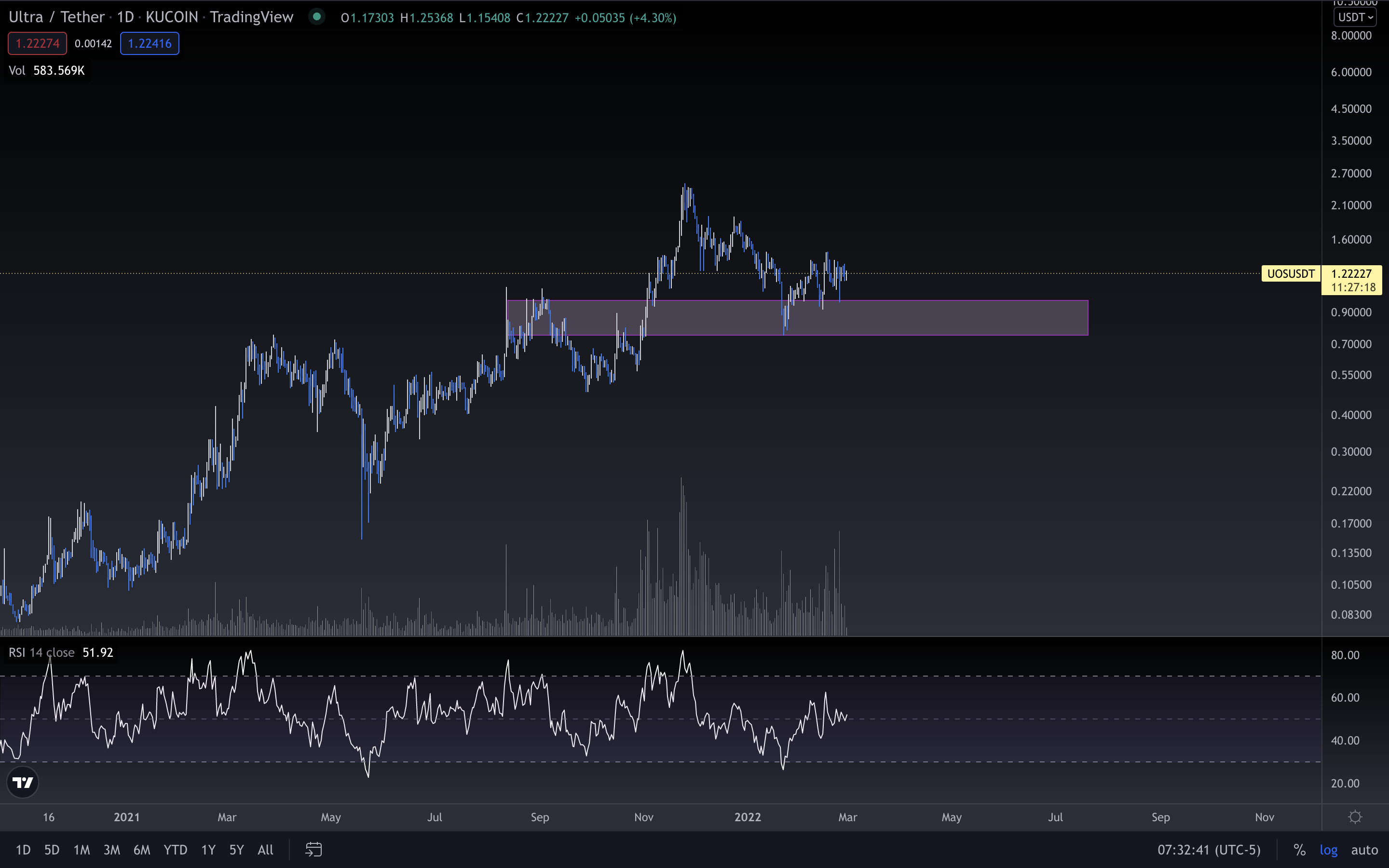 The UOS chart has been basically non-stop up ever since its inception in 2020. The token has a nice rebound off the lows from January and has been grinding up steadily while many other tokens have gone flat since then.

However, UOS isn’t out of the weeds yet. The macrostructure is still a bit uncertain. If Bitcoin can hold the line, then UOS should have no problem continuing its journey upwards. But if we see another capitulation from Bitcoin, I’d look to the purple-shaded region between $0.79 and $1.00 for an entry.

The last pick on today’s list of gaming altcoins goes to the play-to-earn game Illuvium (ILV). Illuvium is an open-world fantasy battle game built on the Ethereum blockchain. Often touted as the first AAA game on Ethereum, Illuvium provides a source of entertainment to both casual gamers and hardcore decentralized finance (DeFi) fans through a range of collecting and trading features 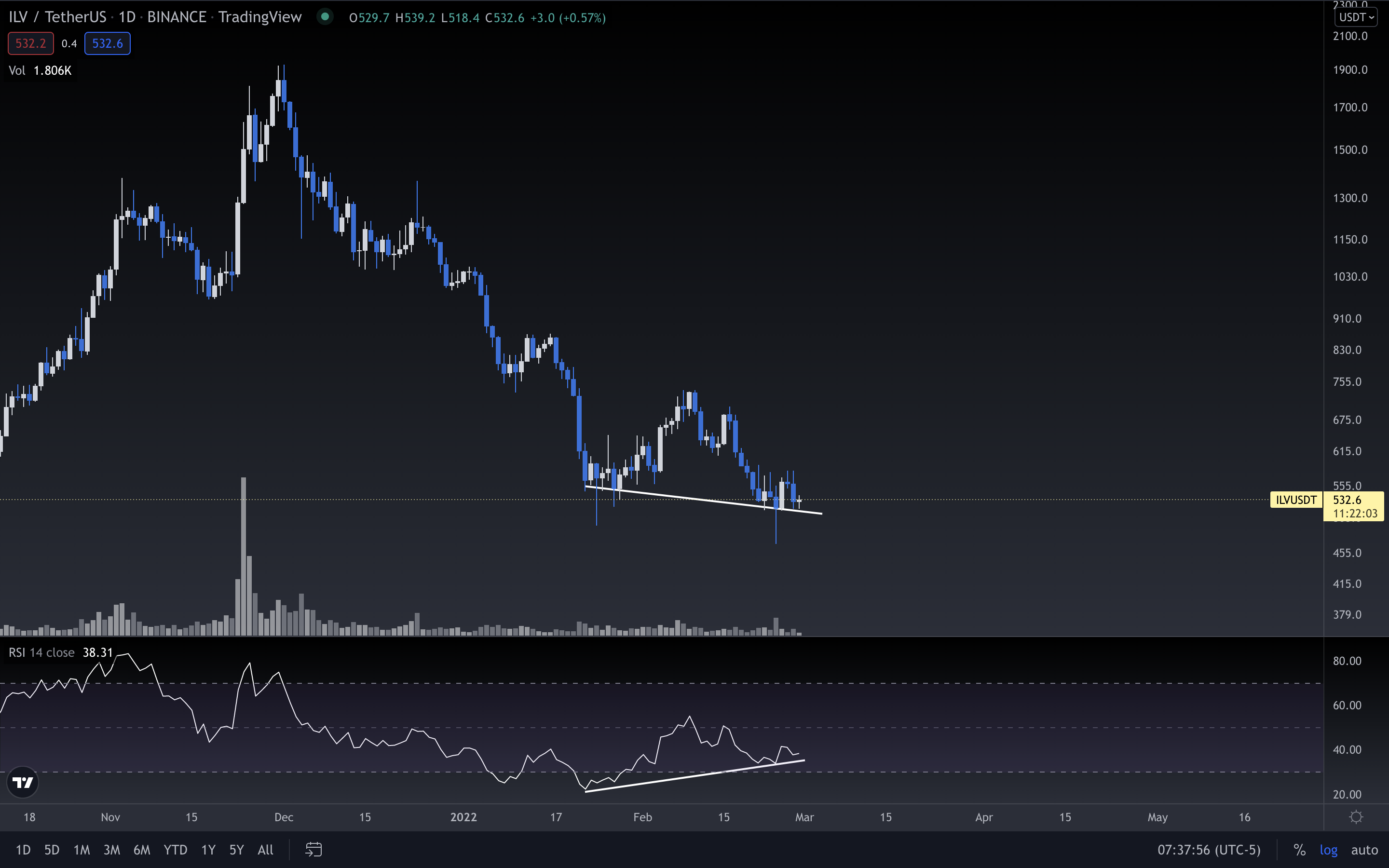 Similar to Enjin, ILV is also forming a bullish divergence, where buyers are feeling more comfortable buying at the current price levels. If we are to see a turnaround in the overall market, ILV could go on to see new highs as an influx of gamers flock to AAA titles like Illuvium.

However, the reverse case is true for a more bearish market. If Bitcoin is unable to find stability at current levels, ILV could continue bleeding out until BTC turns around again.

That’s all for this week’s list of gaming altcoins. Be sure to tune in next Monday to find out which tokens are looking like top picks for the 2022 bull run.

The post Three Gaming Altcoins For The Week Of February 28th appeared first on CryptosRus.

Three Gaming Altcoins For The Week Of February 28th