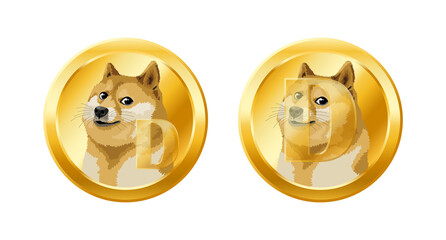 The crypto market has continued to follow a bullish trend in the last few weeks after enduring a tough start to the year. Although the market shows promise, one cannot determine when the market might make a decline. This is one of the reasons why traders need to make a clear strategy to trade whichever token they wish to in the market. One of the few types of tokens that might fit this bill is meme coins. Although most people run from them due to volatility, they have proven to be good in terms of long-term profits. In this article, we will be looking into the differences between Shiba Inu and Dogecoin.

What Are Meme Tokens?

Meme tokens or memecoins are tokens that were created as a joke. The first-ever meme coin, Dogecoin, was created back in 2013 to mock Bitcoin at the period. These coins are describable by some features, including their high volatility rate and lack of utility. Although these meme coins have no utility in the market, traders have often keyed into the projects to help increase their value for their profits. Famous Tesla CEO Elon Musk is a typical example as he is an ardent advocate for the digital asset. Besides Elon Musk, other celebrities have also drummed support for the tokens, with some being ambassadors for different meme tokens. Although Dogecoin is the most popular, so many other meme tokens have been created across the crypto market. Some of these tokens include Shiba Inu, Dogelon Mars, and others.

How Do Meme Coins Work?

Most of these meme coins were created as jest, meaning they have limited or no real-life use cases. For example, the Mongoose coin came into the market after a member of the US Congress said the name at a crypto hearing. Meme coin became the toast of the market after the GameStop issue in 2020. The traders of the group turned their attention to Dogecoin and drove up its value after then. However, some of these tokens have been able to create meaningful impacts in the market. One such is the partnership to fund a charity owned by Kimal, Elon Musk’s brother. Unlike Bitcoin and some other tokens with a supply cap, most of these tokens have no cap. This is one of the reasons why they are subject to massive price swings in the market.

What Is Dogecoin (DOGE)?

Dogecoin is a peer-to-peer digital asset that was built on the litecoin blockchain. The digital asset is open-sourced and is also described as a meme token. It entered the market in 2013 and is distinct due to the image of the Shiba Inu dog logo its developers created. Although Dogecoin was created to make jest of Bitcoin at the period, it has some advantages in the market. Dogecoin uses a script algorithm, with its main feature being its low price and unlimited supply in the market. Dogecoin saw a massive rise in value in 2017 following the general crypto market surge. During this period, the token amassed a massive number of followers. Although it is no longer trading where it used to be, some traders are still tipping the coin for space among top tokens.

What is Shiba Inu (SHIB)?

Shiba Inu is a memecoin that was built on the Ethereum blockchain. It is easily recognizable due to the Shiba Inu dog image created on it. The crypto market population considers the token a close substitute for Dogecoin, while some call it the ‘Dogecoin Killer.’ Shiba Inu was created in 2020 by a group called Ryoshi. Shiba Inu gained fame in the market after it experienced a massive surge that took its market cap to $41 billion in October 2021. One of the proponents of the rise was Elon Musk, who tweeted a picture of his new puppy named Floki. Shiba Inu directly rivals Dogecoin in the market and has overthrown the token at one point in the market. It remains unseen if this will eventually happen.

What Are The Differences Between DOGE and SHIB?

Shiba Inu was created on the Ethereum blockchain and is classified as an ERC-20 token. Traders who intend to leverage smart contracts to make products in the DeFi sector can do so using Shiba Inu. Investors can use the ShibaSwap to stake their SHIB tokens for rewards. However, traders should note that this might cause inflation, which could see the price of the token reduce drastically.

Dogecoin presently has about 132 billion coins in circulation and will continue to grow every day as new coins are being issued. About 5 billion Dogecoin are issued every year without on the total number. The unlimited amount of Dogecoin tokens has been part of the main features of the token as traders continue to purchase it. On the other hand, Shiba Inu has a set supply of 1 quadrillion tokens ever to be produced. However, half of those were given as a gift to Vitalik Buterin, the founder of Ethereum. It is worthy to note that Buterin burnt almost half of the tokens. Most of the remaining tokens are presently in a locked pool on Uniswap.

The community is one integral part of the success of a project and would help drive the adoption of the token. In terms of the community size, Dogecoin boasts a massive 2.3 million members across the famous platform Reddit. This is a space where all things related to Dogecoin and how to push the price of the token high are discussed. On the other hand, Shiba Inu has about 468,000 followers in its community across Reddit. This goes to show that a lot of people support Dogecoin compared to Shiba Inu.

Meme tokens are one of the most volatile in the crypto market, so most crypto exchanges have elected not to list them. However, traders who intend to purchase the meme coins can do so at Coinbase, KuCoin, and Binance.

Although both tokens are in the same category, they have specific features that set them apart. However, some traders prefer to keep both in their portfolios, while others will choose one of them. It is also worthy to note that traders who intend to trade these tokens must conduct in-depth research into every detail regarding them. Traders should also learn what strategy to adopt in trading these tokens. Finally, traders should ensure that their portfolios are diversified as it would help them mitigate losses.

BEST Meme Coins? Here are Differences Between DOGE and SHIB!