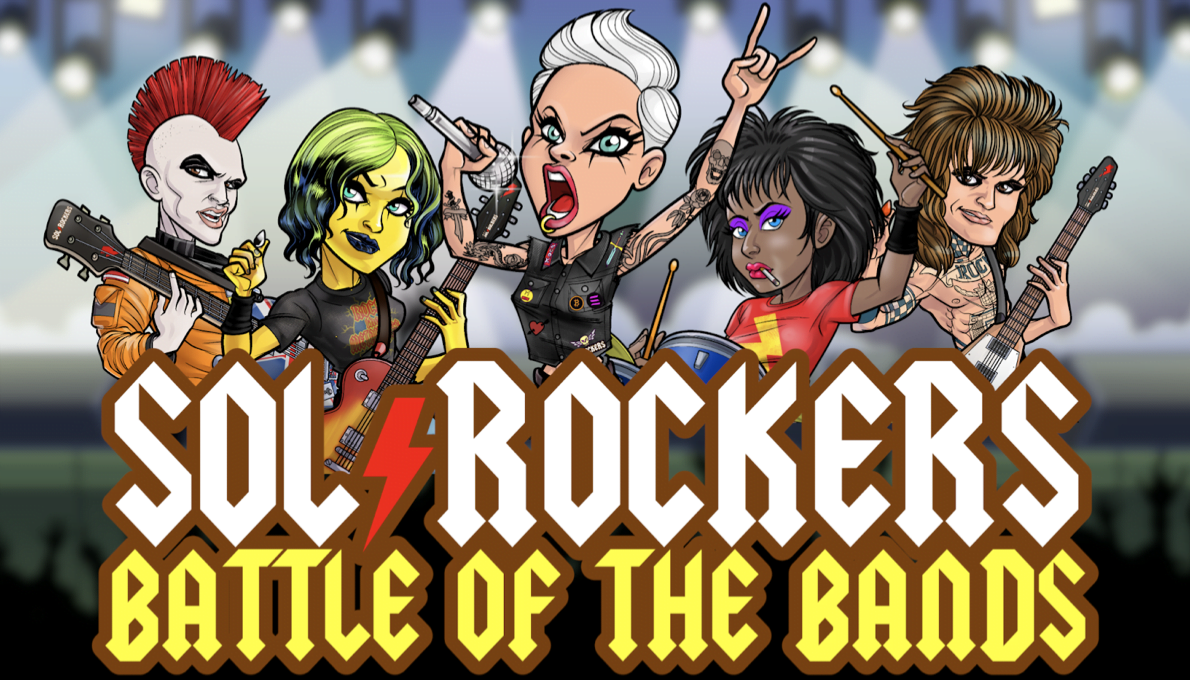 SolRockers Battle of the Bands is a next-gen PVE/PVP rhythm game. It leverages the Solana blockchain and is powered by the Unity game engine. Users can assemble their SolRockers NFTs then name and stake their band to any of the 20 music studios. After that, they can battle in the play-to-earn rhythm game. Here, users get a chance to improve their skills and earn $IROC tokens daily.

SolRockers is a hard rock-inspired NFT collection that serves as an $IROC token generator. It features an equal number of male and female characters composed of various types of musicians.

There are 8,000 NFTs in the collection, whereby each NFT comes with 9 unique attributes, such as clothing, hairstyles, and instruments. The rarity of a given asset is significant to the earning potential of a given stock. It can affect the earning power and increase the value of the stock. The same applies to SolRockers NFTs, which are rare. Notably, the rarest NFTs in the game are the top 8 “Aces.”

Another unique feature is the opportunity to be a part of a new NFT collection by creating a SolRockers Band NFT. Combine 4 original SolRockers and mint, then sell on major marketplaces. Collect royalties every time it sells and collect fees from all game transactions.

Battle of the Bands

The SolRockers game, Battle of the Bands, is a fast-paced rhythm game that features hard rock and metal songs. As suggested by the game’s developers, “it’s a great way to keep your fingers moving while playing like a rock star. The game will be challenging and fun.”

In practice mode, one can choose from 10 different difficulty levels to earn accelerated daily $IROC rewards. Once confident, users can hit the road to earn even more by playing 10 separate gigs at legendary venues in tour mode. On the other hand, if players do not feel like going on tour, they can stay in the studio to practice and earn passive rewards.

Performing at the highest level separates garage bands from arena rock stars. With the help of their impeccable performances, users can reach the top ranks and compete against other players.

The Battle of the Bands NFT groups can compete against each other in global player vs. player matches. Wager varied amounts of $IROC tokens in a winner takes all competition. Gamers can climb the charts through multiplayer competitions where the top players are rewarded a large $IROC bonus.

The top bands in the competition also receive airdrops in SolGear NFTs to boost earning power and VIP invitations to own a legendary music venue. The more you play, the more potential $IROC token rewards you can earn.

On SolRockers, there is a feature called earning power which is a token multiplier determined by the SolRockers NFT rarity ranking. The feature determines the calculation of $IROC tokens earned per day while staked to studio ownership NFTs. Note that it only applies to NFTs that are staked to a studio.

SolRockers members can get their $IROC tokens by buying them on a decentralised exchange, playing the Battle of the Bands game, or passive earning through the staking of your NFTs. SolRockers can also participate in accelerated token drops through Whitelist events for devoted members.

There will be several token burn mechanics by spending $IROC tokens to mint a limited amount of Backstage Pass NFTs for Backstage Bastards (Gen 1 SolRockers) and SolRockers Band NFTs. $IROC tokens can also cover expenses associated with touring and competition. In addition, users can buy SolRockers merchandise and concert tickets in the platform’s marketplace.

Players with SolRockers NFTs can build bands to play Battle of Bands and earn $IROC tokens. They can do this as they tour, practice, and compete with other players. Notably, the user only needs one NFT to start earning $IROC token rewards.

Players can earn passively by staking their SolRockers NFTs to a studio or venue. Studio NFT owners, on the other hand, receive a percentage of the NFT rewards earned by those who are staked to the studio.

Users can also have venue ownership NFTs for more tokens. When a show is played at this venue, they earn a percentage of the earned tokens token.

Music Contribution in the Real World

SolRockers cares about musicians; as part of SolRockers’ NFT sales will be donated to MusiCares. The organisation offers vital health and welfare services to the music community.

SolRockers NFTs are rare, whereby a high rarity means more earnings. On SolRocker’s marketplace, the top 8 “Aces” are very rare and the most desired.

Roadmap Details: What is Coming?

The SolRockers Roadmap is arranged in phases. Currently, the platform is still in Phase 1, which involves developing and marketing the SolRockers NFT collection on Solana.

The next step is Phase 2, which includes the SolRockers NFT mint. Users can participate in the mint during Spring 2022, with more details coming soon. The sale will feature 8,000 SolRockers, sold at a fixed price on Solana. A random number will determine the rarity of SolRockers that each purchaser receives. Once the sale is completed, SolRockers will be sent to the buyers immediately.

Lastly, there will be a Phase 5 that will feature a merchandise store launch, artist collaboration, and a music creation app.

SolRockers team is a group with talented folks in the music industry, game design, finance, creative arts, and dApp development. With this dedicated team, there is a big chance of success for all participants in the SolRockers ecosystem. Users can play to earn Battle of the Bands passively and actively with NFTs, all of which are a fast-growing niche in the gaming community.

Disclaimer: This article is not intended to be a source of investment, financial, technical, tax, or legal advice. All of this content is for informational purposes only. Readers should do their own research. The Capital is not responsible, directly or indirectly, for any damage or loss caused or alleged to be caused by reliance on any information mentioned in this article.

Previous PostElon Musk is not in favor to bring Dogecoin into Web3Next PostThe Decentralized Social Blockchain Is Set to Push Its Tech Breakthrough Hypersync: A Fast and Scalable way to reach 1 billion users