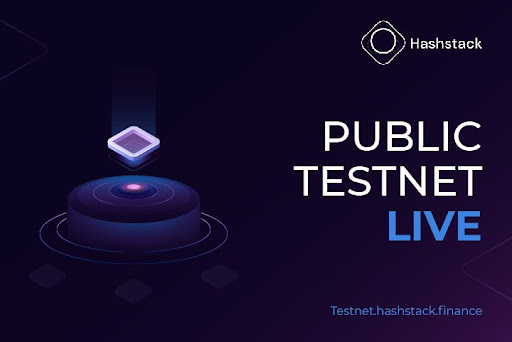 Hashstack Finance, a DeFi platform focused on disrupting the DeFi lending market, officially announced its public testnet launch of its Open Protocol. The company said in a Friday press release its Open Protocol is the first of its kind to offer non-custodial, secure under-collateralized loans.

DeFi users will now be able to experience first-hand how to extract maximum value from their collateral when borrowing. According to the press release, Hashstack’s Open Protocol is the only platform offering under-collateralized loans at a 1:3 collateral-to-loan ratio.

For example, a user can borrow $300 after securing $100 worth of assets as collateral. From this, the user can withdraw $70 (up to 70% collateral) with the remaining $230 representing in-platform trading capital.

Hashstack notes that the $230 in trading capital can benefit from a novel mechanism that allows for the eternal scalability of storage and logic of smart contracts. This represents a “significant improvement” over the industry-standard EIP 2535.

Hashstack expects to integrate as many dApps with the Open Protocol as possible without changing the smart contract addresses.

‘A glimpse into the future’

The current DeFi environment is plagued with protocols requiring over-collateralization. Hashstack notes in the press release it is moving in the opposite direction and is “proud to give borrowers a glimpse into the future of DeFi lending.” It adds:

Hashstack’s platform integrates with other DeFi entities like Pancakeswap to provide in-app market swaps and improve loan utilization. This means borrowers can swap their borrowed tokens for other coins – both primary or secondary without the need to switch the dApp.

Commenting on the launch of its Open Protocol, Haystack founder Vinay Kumar said in the press release it has already attracted more than $5 million in total value locked (TVL). The executive added:

“The public testnet release marks a significant accomplishment in Hashstack’s roadmap as we prepare to launch the Open Protocol mainnent later in the second quarter of 2022.”

The post Hashstack Finance’s public testnet represents a ‘significant accomplishment’ appeared first on The Home of Altcoins: All About Crypto, Bitcoin & Altcoins | Cointext.com.