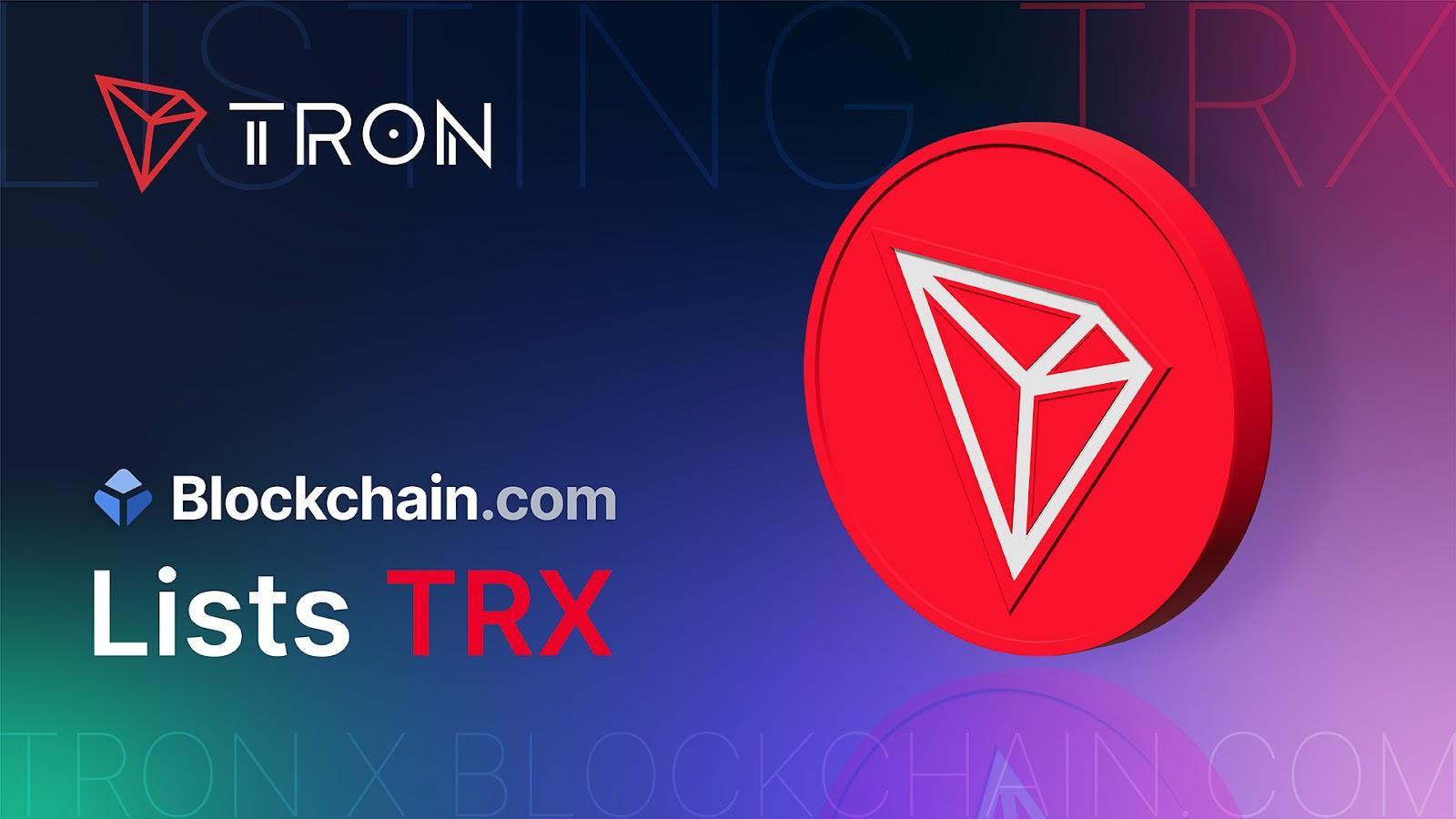 Blockchain.com has listed TRON’s native utility token TRX on its platform. Multiple incentive programs will be featured, including one that allows users to earn up to 8% in annual rewards for users who hold their TRX in a Blockchain.com Rewards Account.

TRX is available to send, receive, buy, sell, swap, and earn rewards in the Blockchain.com Wallet and to deposit, trade, and withdraw on the Blockchain.com Exchange, making TRX more accessible for people to use worldwide. With this addition, Blockchain.com is striving to grow the Web3 landscape by attracting more notable layer-1 public blockchains.

Blockchain.com is one of the original cryptocurrency companies that began as the first Bitcoin blockchain explorer in 2011 and later created a cryptocurrency wallet and exchange. In addition to its consumer offerings, they provide a one-stop shop for institutional clients that includes OTC trading, custody, and lending capabilities. With its robust balance sheet, technology, and market expertise, they partner with institutional clients to create bespoke solutions tailored to specific objectives. The oldest crypto platform has a track record of helping increase liquidity for newly listed tokens as it becomes available to millions of users.

Over 37 million verified users worldwide and 84 million wallet holders use Blockchain.com products, opening up exposure to TRX among a large community of users. There are millions of dollars worth of volume each day on the platform and multiple different features, including Rewards Accounts where users who hold their TRX with Blockchain.com will be able to earn up to 8% in annual rewards.

TRX is a TRC-20 utility token that enables the authority of the TRON protocol and its dApp ecosystem. TRON strives to become a framework for the decentralized web. By providing users with fast and low-cost transactions, its network is optimized for speed and scalability. As the mainnet native token of TRON, TRX is used to power smart contracts, pay transaction fees, and serve as a unit of account across the TRON ecosystem.

The listing of TRX on Blockchain.com and on other major platforms has been a common theme for TRON DAO throughout the year. Staking rewards, enhanced liquidity, and widened user reach have all helped expand the TRON ecosystem into becoming much more mainstream. The efficient delegated proof-of-stake consensus mechanism and its wide range of utilities for business and developers to build on its network have helped TRON become one of the largest public chains in the world, with 2,000 TPS, over 110 million accounts, and more than 3.8 billion transactions. This latest listing makes TRX more attainable for the public to utilize on TRON dApps to further grow the ecosystem.

TRON is dedicated to accelerating the decentralization of the internet via blockchain technology and decentralized applications (dApps). Founded in September 2017 by H.E. Justin Sun, the TRON network has continued to deliver impressive achievements since MainNet launch in May 2018. July 2018 also marked the ecosystem integration of BitTorrent, a pioneer in decentralized Web3 services boasting over 100 million monthly active users. The TRON network has gained incredible traction in recent years. As of August 2022, it has over 110 million total user accounts on the blockchain, more than 3.8 billion total transactions, and over $13.2 billion in total value locked (TVL), as reported on TRONSCAN. In addition, TRON hosts the largest circulating supply of USD Tether (USDT) stablecoin across the globe, overtaking USDT on Ethereum since April 2021. The TRON network completed full decentralization in December 2021 and is now a community-governed DAO. Most recently, the over-collateralized decentralized stablecoin USDD was launched on the TRON blockchain, backed by the first-ever crypto reserve for the blockchain industry – TRON DAO Reserve, marking TRON’s official entry into decentralized stablecoins.

Blockchain.com Lists TRX in its Wallet and Exchange