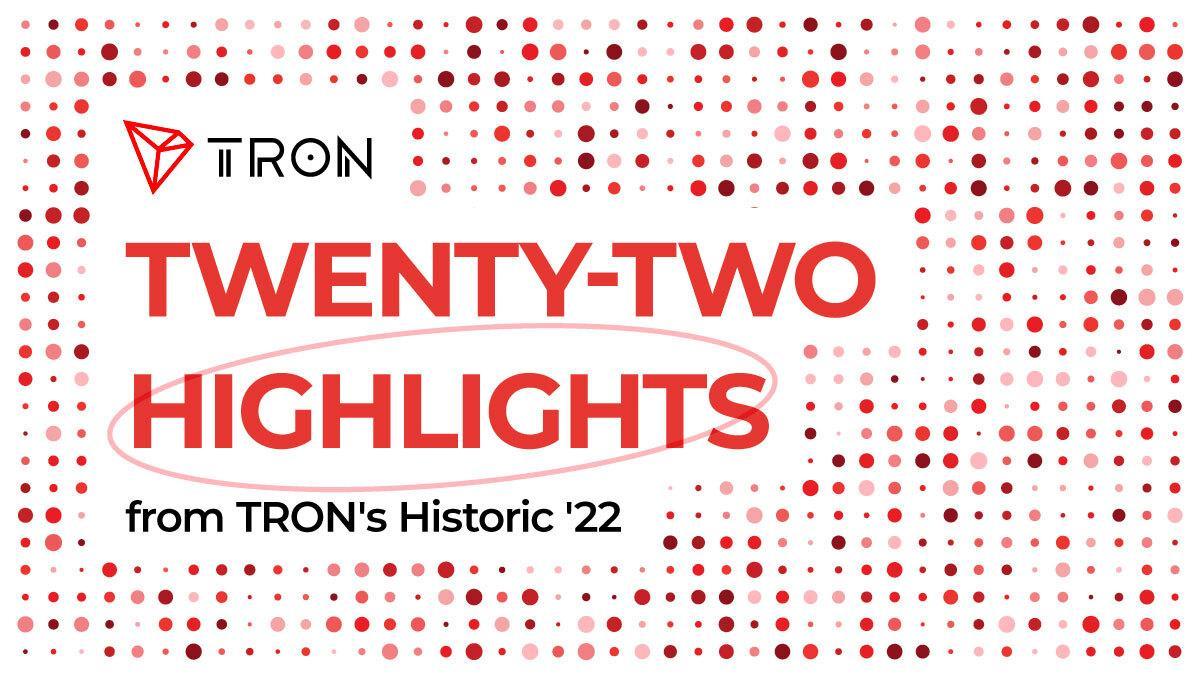 For TRON DAO, 2022 was a year of historic growth. Here are 22 highlights from the fastest growing public blockchain’s record year:

On April 15, the APENFT Marketplace launched on the TRON blockchain.

In October, the TRON founder and current ambassador H.E. Justin Sun was named to Huobi’s Global Advisory Board, and the TRON ecosystem has started more partnerships with the exchange.

On August 3, the Peg Stability Module (PSM) was rolled out, which allows users to swap between USDD and other mainstream stablecoins like USDT and USDC at a 1:1 ratio.

On October 17, TRX was listed on the Binance CMC Cryptocurrency Top 10 Equal-Weighted Index, which tracks the performance of the top ten digital assets on CoinMarketCap as ranked by market capitalization.

In 2022, the total amount of TRX burned from various utilities was 11.74 billion, considerably accelerating its deflation.

On August 10, Travala.com, the world’s leading blockchain-based travel booking platform, announced its adoption of USDD and TRX as means of payment.

TRON now has the second-largest total stablecoin circulation, next to Ethereum, with a market cap of $39.5 billion.

TRON DAO launched their Ecosystem Fund with 8 unique programs for funding, including TRON DAO Ventures, which intends to invest in promising blockchain startups.

# 9 the national blockchain of Dominica

On October 7, the Commonwealth of Dominica announced TRON as its national blockchain and authorized seven TRON-based cryptocurrencies as legal tender for everyday use.

On April 21, the TRON DAO Reserve was established to safeguard the overall blockchain industry and crypto market.

On August 1, Crypto Daily described H.E. Justin Sun as one of the premier leaders in the Web3 era.

In May 2022, TRON launched USDD, the first over-collateralized, decentralized stablecoin, which is now held in more than 130,000 wallets. On November 2, Messari released the report “State of USDD Q3 2022.” USDD finished the year with a circulating supply of over 725 million and a collateral ratio of greater than 200%.

# 5 one of the most eco-friendly blockchains

On August 24, in the report titled “Energy Efficiency and Carbon Footprint of the TRON Blockchain” released by the Crypto Carbon Ratings Institute (CCRI), TRON was rated as one of the most eco-friendly blockchains.

# 4 the 4th anniversary of MainNet independence

On May 31, TRON celebrated the fourth anniversary of its MainNet launch.

Three Seasons of the TRON Grand Hackathon, a.k.a. “HackaTRON,” took place in 2022, with over 2300 total participants and a combined total prize pool of over $2.7 million.

According to DefiLlama, by the end of Q3, the Total Value Locked (TVL) on TRON had reached $6.33 billion, up 61% from Q2, surpassing BSC to become the blockchain network with the second-largest TVL worldwide. Messari released its first ever TRX research report on November 5, titled the “State of TRON Q3 2022.”

63 million new TRON user accounts were established in 2022. TRON aims to become the primary settlement layer of the global economy. As the global trend-setter in cryptocurrency, TRON is developing an ecosystem infrastructure that will be able to serve every human on the planet.

TRON DAO is a community-governed DAO dedicated to accelerating the decentralization of the internet via blockchain technology and dApps.

Founded in September 2017 by H.E. Justin Sun, the TRON network has continued to deliver impressive achievements since MainNet launch in May 2018. July 2018 also marked the ecosystem integration of BitTorrent, a pioneer in decentralized Web3 services boasting over 100 million monthly active users. The TRON network has gained incredible traction in recent years. As of January 2023, it has over 133 million total user accounts on the blockchain, more than 4.5 billion total transactions, and over $9.2 billion in total value locked (TVL), as reported on TRONSCAN. In addition, TRON hosts the largest circulating supply of USD Tether (USDT) stablecoin across the globe, overtaking USDT on Ethereum since April 2021. The TRON network completed full decentralization in December 2021 and is now a community-governed DAO. In May 2022, the over-collateralized decentralized stablecoin USDD was launched on the TRON blockchain, backed by the first-ever crypto reserve for the blockchain industry – TRON DAO Reserve, marking TRON’s official entry into decentralized stablecoins. Most recently in October 2022, TRON was designated as the national blockchain for the Commonwealth of Dominica, which is the first time a major public blockchain partnering with a sovereign nation to develop its national blockchain infrastructure. On top of the government’s endorsement to issue Dominica Coin (“DMC”), a blockchain-based fan token to help promote Dominica’s global fanfare, seven existing TRON-based tokens – TRX, BTT, NFT, JST, USDD, USDT, TUSD, have been granted statutory status as authorized digital currency and medium of exchange in the country.